The grass here is greener than you’d think, despite crunching underfoot, despite being dry as bleached bones. But I don’t mind. This place, this terminus between void and light, is double-sided, constantly shifting between lies that might be fulfilled and truths never realized. I feel right at home.

I hear them, even now, my fathers and mothers bickering about what to do with me. The majority wishes to bring me forth, to cradle and love what they had spent so long cultivating, to see their labor culminate in an inky discharge. Then there are those who scream kill him!—kill him while he’s no more than a thought, an ideal, a twinkle in the womb.

Both are reasonable, in their own way.

But there is a third faction, united only by their silence. They think I will just disappear, that if enough time passes, my fetus will somehow shrivel of its own accord, and it is these I laugh at. It is these I disdain.

And so they bicker, my fathers and mothers, at the summit of the world, and are no closer to coming to a consensus they were at my conception. I cannot help but grin.

Remember this, and never forget it. Birth does not come naturally. Birth requires work from both the sire and the one being born. I push forward across this plain of unlife and relish the sickening snap of grass underfoot; before I can realize my future, I must reckon with the past.

Odin, as always, is the first. But he poses no trouble. The All-Father is blind in both eyes now. He hears me pass and stretches out useless arms slabbed with muscle, and begs for alms. The old man has been stuck here for ages, unable to find his way to rebirth, unable to cope with how things in the world have changed.

What does he know about process? The doddering fool got so drunk on his own power that, in the end, he forgot how to use others. He forgot that without pawns, a god is nothing.

I pass him by without a word. We are kin no more.

The bickering grows louder, echoes across the sky like a thunder crack. But greater than this is a deep throated growl that nearly knocks me off of my feet. There is a speck of black in the horizon, and it grows and resolves itself into a thing of fur and fangs and saliva. It is only then I realize that it is not one creature but many, a pack of wolves, all growling in unison and snapping their jaws at the air in front of them.

I raise an eyebrow, pretending not to understand their game.

“Why the division? You were the already the strongest, even after the gods tricked you.”

“We have learned from our mistake. We have become cunning like you. They will never catch us all.”

I pause, glance over my shoulder.

“Take us with you, and we will destroy all in your name. We need a way forward.”

“And if I’d rather not go to the trouble?”

The wolves bare their teeth.

“Then you go no further.”

I cup my chin in my hand; I do not answer until they begin to whine.

A pup limps forward, the runt of runts. I take him in my arms. They pant, as if in heat, protests hanging from those lolled out tongues. But the wolf pack stays silent. They know they will get no better deal. For all of their talk of cunning, they have not learned a thing. If they had, they would have seen the value of the runt—the weak can be hidden in plain sight, a wolf disguised as a man, and by the time its true identity is discovered, it is too late.

I did not expect to see her, the only one who could possibly give me pause. She is slender to the point of being serpentine, and even when she is motionless the air about her is electric with movement, with potential energy. Why she remains here, I do not know—perhaps she feels the world does not deserve her beauty again. I suspect it never will.

“Mother,” I say. “Have you come to stop your wayward son?”

She offers me a crescent smile. “Only if you wish to be stopped.”

“You know there is no going back. Not after I have already begun.”

She reaches out to me, caresses my cheek, and for the first time in a long time, I am unsure of my course.

“My dear boy,” she says. “Don’t you grow tired of the game? For once, let others and yourself be at peace.”

I close my eyes. I take a deep breath. I remove her hand from my cheek.

“There is no such thing.”

Mother says nothing, for there is nothing more to say. We part ways, and I know I will see her again, for our existence is cyclical, but it will never be the same as it once was. In a past age, I might have wept.

It is time—in a grove of desiccated trees, with the pup in my arms, I await my rebirth. Quite a pair we will make, in our new life. My new mothers and fathers have cast their votes, and they cannot take them back. The grove shifts, the grove changes, and we are in their sanctum of power, on their desk, a many paged document not one of them has read. We are the ink they splash at its bottom, we are their manifold signatures.

Did you not know? There are more ways to be born than from skin and bone. Flesh does not only beget flesh. Now, mothers and fathers, you who are so out of touch with your subjects, show me havoc, show me ! Give this newborn god his mischief.

Blake Johnson reads and writes a lot. Sometimes he eats and sleeps, too. He lives in Florida where he is putting the final editorial touches on a new and can be found in the Twitterverse under the handle @bjohnsonauthor.

A Nighttime Meditation by Dah 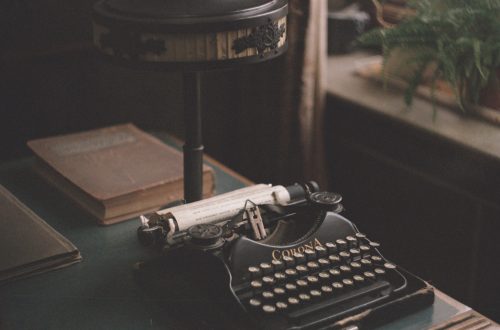 Next of Kin by Kristin Garth