Come Desdemona: I have but an hour
Of love, of worldly matters and direction,
To spend with thee. We must obey the time.

Her new husband speaks his lines. The liquid vowels melt into dark water. He moves towards her, his red and gold uniform, in the chiaroscuro, exuding the mellow warmth of a Rembrandt canvas. His arm, the muscular, epauletted arm of a hero of the Risorgimento, takes hers. She submits, listens as her black lace skirts shush across the bare stage towards the exit. What do they whisper? Obey the time.

A cascade of images tightens her heart, painfully laced into her bodice. A handkerchief dropped, retrieved by a mischievous hand, a monstrous lie woven around it, her husband descending into foaming madness, his hands tightening around her throat. Her cold white figure on the marriage bed, pointing at him like an accusing finger as he grasps his sword, drives it home.

Terrified, she slips from his grasp and disappears into the black folds of the curtain. Fold after fold after fold, always another one to sustain her fall. She swims down a staircase of velvet, of unstarred night, of viscous time, her head rolling to one side and then the other, taking in bubbles of changing air. Only his voice pursues her, reverberating through the ambiguous fabric. Desde –.

Mona? She gasps, as though rushing up through heavy lagoon water as her oxygen dwindles. His muscular arms pinion her before she falls. My God Mona, what’s wrong? Here, sit down.

Gripping her tightly, he steers her to a stone bench outside St Mark’s. Pigeons and their shadows fall like rain. Air evades her, she has to fight to reclaim her share. I’m fine. Her voice, high and tinny, quavers into the lapel of his creaseless linen jacket. What were you saying?

I was telling you how me and the boys were in a tight spot in Urozgan. Afghanistan, you know. He always assumes she doesn’t. Her virginal ignorance attracts him, makes tremors of tenderness run from eye to fingertip to penis.

She half listens, half slips back to that other time. Those other times. It’s the 19th century, but also hundreds of years earlier. Waving dark hair, unbound, rushes down her back by candlelight. Alone in her bedroom, she sings to take the edge off the night. Sing willow, willow, willow … She’s quite safe here, in her father’s house, water sucking quietly at its mint façade. No reason to be afraid. And tomorrow he might come again. He pretends it’s for matters of state, but she knows it’s for her. Before he starts into another anecdote he cocks his head, listening for her listening breath.

She feels Oliver’s shoulder lift slightly as he checks his Rolex. We’re due at the restaurant in ten minutes, my love. Punctuality is encoded in his cells. Tell you what: you stay here while I flag a gondola. No, it’s not safe – you! He hails an old black-clad woman as though she were a leaky boat. Stay with this lady. Here’s five euros. When I get back, another five. D’accordo? His accent does not accord with the language. She doesn’t turn to watch him increase in resolve as he dwindles in size.

When the gondolier launches into O Sole Mio, Oliver drums on his shoulder. Not that one again. Non – I can’t get this damned language. You tell him. Per favore, un’ altra canzona, she says. How easily her mouth ripples out the sounds! So much about her he doesn’t understand. Privilege, he tells himself. No one in her lineage would have signed up to the army as a ticket out of poverty. She outshines him in subtle ways. He stakes his confidence on her sweet willingness to be schooled by him in the things that really matter. She’s leaning on his shoulder now, gazing up at his aviators. He takes them off, never mind about the refracting light-on-water.

The gondolier, crooning inoffensively, poles down a narrow canal. Ecco il ristorante. He points with a jerk of the head. Water sucking at a mint façade. She sways, clutches the side of the boat. What is it, Mona? This place is having a bad effect on you. I’m going to change our itinerary. Tomorrow, Cyprus.

Candlelight, black velvet banquettes, crimson walls exuding mellow warmth. The exquisite aperitivi turn acid on her tongue. As they wait for the piatti principali, her new husband draws a cotton handkerchief from his blazer pocket and hands it to her. It was his mother’s, he says. Numbly, she strokes the faded fabric. Don’t you like it? There’s a slight frown behind his moustache. She looks up to see the shadow of a new question in his eye.

If this is a stage, she doesn’t know where the exits are. And even if she fled again, swam through viscous folds, she would be reconstituted in obedience with – what? Not time, exactly. Tempo, perhaps? The beat that tells you what kind of dance it is.

Faye Brinsmead lives in Canberra, Australia. She drafts legislation during working hours and writes short fictions in all the snippets of she can find. Her work appears or is forthcoming from, Review, , Reflex Fiction, Vamp Cat Magazine, and other journals. Say hi on Twitter @theslithytoves. 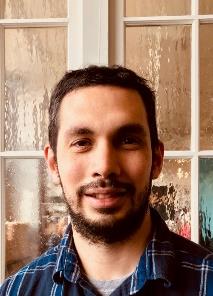