She waited for him. After the dust had drifted down to lie undisturbed, after Arthur had been borne to Avalon and Excalibur flung into the Lake, when Camelot’s glory had begun to fade and the city diminished into a Saxon vassal state, Guinevere waited for Lancelot.

He would return for her. Left to right, dark to light, morning to night, they belonged. Their love was one that would echo down the centuries, be the touchstone by which all other forbidden, fateful loves would compare themselves, and find themselves wanting. Their names would enter legend, and then myth, as the possessors of a love so true, so devoted and so powerful that a kingdom was sacrificed to it. A love so great that a king died, and evil came upon the land so that it might be fulfilled.

And so, she waited with eager impatience. She was shuttled from one great house to another, by what remained of the noble families of the realm. She wasn’t so much a danger as a profound embarrassment, but she had once been a queen. The earls and barons that had survived the Saxon invasion retained a modicum of reverence for her. They could not quite bring themselves to turn her away. Guinevere reassured each of them in turn that she was awaiting the noble Sir Lancelot, who surely would not be delayed long. No power on earth could keep him from his queen, his true love.

Women wiser than the fallen queen, old and young alike, shook their heads and said nothing. They had all heard the news that Lancelot had left Albion, aware that more than one former knight of Camelot would gladly shove a sword in his gullet. Already there were rumours that he had pledged his services to a powerful French baron and his beautiful young wife. Particularly the lady, towards whom Lancelot was chivalry itself.

But no-one told Guinevere. They were unwilling, or perhaps lacked the courage, to quench the sparkle in her eyes that glittered whenever she spoke of Lancelot.

It was all the poor thing had to cling to, now.

Day followed night followed day. And then winter followed autumn, and summer followed spring. Still Guinevere waited for her love. She never thought to make herself useful to her hosts, by assisting in the running of the household. It never occurred to her to journey forth in search of Lancelot and those who might know of his whereabouts. Nor did she lend her knowledge of politics and economics to rebuilding what the Saxons had devastated. She would sit at a window, embroidering elaborate scenes of courtly love and singing to herself. She made a charming picture, although her hosts invariably found it quite irritating.

Time flowed sluggishly away, in contrast to the dainty pricks and leaps of Guinevere’s skilful needle. Eventually, a decade passed since Arthur’s demise, and Guinevere found herself at the doors of a convent. Her subjects had done their duty and more by their whorish queen, a surly former knight informed the Abbess. Let the oh-so-merciful church take its turn.

Prior to becoming a nun, the Abbess had been the madam of a certain house that catered to the needs and whims of sailors from lands near and far. She frightened the knight off with a stream of language that could have scorched a suit of armour, offered up a quick plea for forgiveness and went to welcome Queen Guinevere.

The Abbess was a worldly being who had taken in droves of cast-off women. Women who were too ugly or too outspoken to be married or too silly to resist false, honeyed words of seduction. Even the occasional girl baby, left on the convent doorstep. This one was no different than the others, queen or not. She clung to her love as a drowning soul would clutch a rope thrown to them. She would come to a better understanding of herself or she would wait out her life here.

Guinevere was a compliant guest, attending mass, working in the garden or kitchen as directed. Her needle was put to the service of God, embroidering altar cloths and frontlets. She spent much of her spare time writing, quill pen twitching in her hand as she daubed precious ink on parchment.

The Abbess would enquire punctually about whether or not Guinevere had contemplated taking the veil. The answer never varied. A gentle but decided refusal, delivered with a pitying glance. The Abbess could never hope to understand the unbreakable bond that existed between Guinevere and Lancelot. Guinevere would never betray it by taking a nun’s vows. She would wait, until they were reunited, and their love could be fulfilled.

‘As you wish,’ the Abbess replied, impervious to the queen’s pity. She failed to mention the latest gossip from France, given to her by an old tavern acquaintance. That Sir Lancelot had been exiled from the Kingdom of Soissons for his affair with the Queen. The Queen of Soissons had screamed out her love for her gallant knight as they burned her. Guinevere had been lucky Arthur had chosen to exile her rather than tie her lovely self to a stake. Still, half the land believed she had been rescued from such a fate at the last moment by Lancelot. Guinevere believed it herself.

Time passed, as it is prone to doing. Still Guinevere waited. She waited herself to death, who came for her, as faithful as Lancelot was fickle.

After she died, the Abbess – stiff in the joints but still hale and hearty – went to her cell and found her writings. The records of her great love affair, her dreams of reunion, paeans to their great and enduring passion. Imaginings in which Lancelot returned to her. Towards the end, she found a text in which Guinevere, in penance for her ruinous affair, took the veil, and never saw Lancelot again, and prayed for a swift death so that he might never look upon her face in life.

The final sentence, unlike its beautifully transcribed forebears, was scribbled in blotchy ink, a hasty little epitaph.

It is so hard to live out a great romance, it read plaintively.

The Abbess stared for a long moment at the little drop of truth in the ocean of the Queen’s delusions. Then, she ripped the page into shreds and let them fall. They would be swept up by one of the lay sisters when she came to clear out the cell, and never read again.

The rest of the papers she gathered up, to be collected and catalogued and placed in the convents library, to be read by visitors and copied and discussed and passed along, until the real tale was quite forgotten and the Queen’s imagined tale was as true as any other handed down over the years.

As true as this one, perhaps.

Carys Crossen has been writing stories since she was nine years old and shows no signs of stopping. Her monograph The Nature of the Beast has been published by University of Wales Press and her fiction has been published by Mother’s Milk Books, Ink and Sword Magazine, Riggwelter, Dear Damsels, Honey and Lime Lit and others. When she’s not writing she’s walking dogs/contemplating nature/living in Manchester UK with her husband.

Her artist name is Aurora after the Goddess of Light, the Bringer of Dawn after the dark night of the soul. She’s an Amsterdam-based artist, all her works are oil paintings on canvas as she paints images in the tradition of magical realism with loads of symbolism and using the traditional oil painting techniques of the old Dutch masters. From 1995-1999 she followed a four-year drawing and painting education at the Drawing Academy Three of a Kind in Amsterdam. Thereafter, she had various exhibitions where she received emotional reactions to her art. People identified themselves in her paintings and somehow felt supported; her work is universal. Not only do her paintings convey her life-story in pictures, color and emotion, they tell the story of humanity at large. A few years later she craved a deepening of her technique and in 2006 she took a two-year schooling of Traditional Painting at the Free Academy of the Arts in Amsterdam. Here she was educated in Dutch Golden Age painting, painting like the old Dutch Masters of the 17th century, learning techniques like underpainting/dead-coloring, Chiaroscuro, and glazing to bring out the vibrancy of color and the delicate interplay of light and darkness.

Furthermore, she’s writing a spiritual memoir and presiding over Stichting De Mussen Toevlucht, a charity that preserves an endangered bird-species in the Netherlands.

The Eye by Kristin Garth 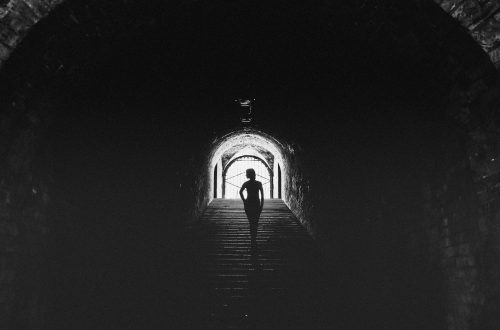