This is the room where we tell stories about the future. It is curved, spacious, and filled with light. The deep stone window frames have no glass, allowing a cool breeze to blow in from the garden. The distant sound of a waterfall can be heard under occasional bursts of birdsong.

You take my hand and guide me through the crowd to a vacant spot on the floor. There must be a hundred people here, maybe more. Most sit cross-legged; some lie back, eyes closed, as if lost in meditation.

A hush descends as the first storyteller rises without introduction. She is young and ruddy, in a trim midwife’s uniform. She sets the scene with aplomb, in an urgent, earthy brogue, and the room is soon in her thrall.

Imagine a humid, stormy night and an inner-city hospital, lashed with rain. The overnight staff are stretched to their limits, rushing from ward to theater, sweating, stressed. In stolen moments they pause at the windows to watch torrents battering cars before pouring into storm drains. Our storyteller is taken in particular by a young couple in the final delivery room, whose window looks out onto the emergency generator. They are green, nervous; first-time parents. The midwife wants to spend time with them, to provide comfort during a long labor, but every delivery room is occupied, and she must attend to several of them. As the night goes on, the rain grows heavier and the ominous rumble of thunder can be heard in the distance. One by one, each delivery room bursts into life with the debut cries of new arrivals. But, in the room at the end of the hallway, the young mother-to-be still groans with labor pains as her partner paces anxiously. Finally, the midwife rejoins the couple just as the interval between contractions shortens dramatically, as does the time between thunder and lightning. The young woman grips her partner’s hand as the midwife says breathe. At the very moment of arrival, a blinding flash is followed by a piercing crack from the skies above them. Momentarily, all is dark and silent. The silence is split in two by the first cry of a baby boy. As if awaiting his instruction, the emergency generator hums into life, and power is restored. As soon as the lights flicker on, the midwife lifts the baby up to meet his mother. Now the mother cries, too. And the father. Even the midwife cries, and she never cried at a birth before or since.

Rapturous applause rings around the room. The young midwife smiles and returns hurriedly to her place. She is replaced at the front of the gathering by a priest, his unkempt beard hanging down over his dog collar. His lively eyes scan the whole room before he begins speaking, his hands clasped earnestly in front of his chest.

The boy whose birth was announced by lightning soon grows up to be a young man. He grows his hair long and finds he has a natural gift for singing and playing guitar. He plays so often and so long that his battered acoustic almost becomes an extra arm. When he cannot find the right words, he plays instead, and this is how he makes sense of the world around him. The young man travels far and wide in a decrepit old car that needs constant work. His hands and face always seem to be stained with oil. In every new town, he finds a bar where he can play until he has enough money to move on again. Somewhere on the road, in just another bar in just another town, he meets a young woman and falls in love. She is also a singer, and a fiddle player. The young man stays in that little town until the young woman realizes she loves him back, and the two set out together. A few towns and a few bars later, they stumble upon a picturesque place with a beautiful green, in the middle of which stands a wooden, steepled church. They seek out the priest who says he will be pleased to officiate, but there must be at least one witness, to make it legal. That same evening, the young couple serenade the regulars at the bar across the green with their mellow songs and close harmonies. They surprise the crowd with a special announcement, and the bar empties out into the church for an impromptu ceremony, after which there is music and dancing under the stars until the early hours. The next morning, the priest seeks out the young couple, to wish them well, but they have already moved on to another town. He never sees them again.

There is a ripple of applause as the priest takes a bow and sits down. He is replaced at the front of the room by another midwife, but this one is older, wiser. The wrinkles around her eyes announce that this midwife is kindly but not to be underestimated; she has seen a lot of life. She speaks more slowly than the previous contributors, and eyes the crowd between sentences to ensure everyone is paying attention.

There is a buzz of anticipation around the neighborhood when the news breaks that a couple of revered musicians have bought an old ramshackle place that has been abandoned for years. The local kids often gather outside, finding excuses to go into the yard, but mostly the couple keep to themselves. Local folks share stories about spotting them in the grocery store or in the park. The musicians are reported to be friendly if not particularly forthcoming. They are mostly away, traveling, but otherwise fixing up the old house. Sightings of the couple in the locality are rare enough that a sense of mystery surrounds them. So, there is much whispering and excitement amongst the midwives when the couple arrives in the maternity department one day to attend a parenting class. The fiddle player is heavily pregnant, and hangs around after class to talk to the midwife in charge. Over the next weeks, they slowly develop a relationship of trust until one day, just before the due date, she asks if the midwife could be the one to deliver her baby. The midwife says she can’t make any promises, but she will do her best to see that it works out. To her surprise, when the big day comes, the midwife takes a call from the guitar-playing husband and makes it to the maternity room just in time to deliver their first baby, a beautiful girl. Over the next years, the midwife has the honor of delivering each of the couple’s four children. She often passes the old house and wonders about them. One day, years later, the midwife is strolling through the park in that neighborhood with her own grandchildren when she spots the musicians and their four children. They stop briefly to chat as the kids skip around them. The midwife is delighted that the children seem happy and healthy.

The midwife smiles briefly to acknowledge the applause across the room and she is soon replaced at the front by another priest in a dog collar, this time a woman. Her long, gray hair, tied up in a bun, gives her the air of someone serious, trustworthy. She is the most solemn of the speakers so far, and looks out across the audience with the sympathetic look of someone who must break bad news. She takes a deep breath before beginning.

A priest sits in her office in the dank basement of an inner-city Episcopalian church when she hears someone moving around in the chapel upstairs. She walks up the stairs, just to see if the visitor needs assistance, as she often does. The priest hovers by the door to the chapel and watches as a woman about her own age, with similar, graying hair, kneels in the first pew and spends a while in silent contemplation. When the woman stands up, as if to leave, the priest introduces herself and offers the chance to talk. She hears a story about a long marriage and four grown children, a hard life on the road playing music, now interrupted by ill health. The woman’s husband is seriously ill in the hospital; she has been told the end is near. The priest offers to visit with her, and together they travel across the city and spend an hour next to the bed of a man who is barely conscious. His wife holds his hand as she tells the priest stories about their life together. Two evenings later, the wife calls the priest from the hospital and asks if she is able to visit urgently. On her way into the room, the priest is intercepted by a doctor, who gives her the prognosis and joins her at the bedside, along with the man’s wife and all four of his grown children. The priest greets each of the family members and invites them to say their goodbyes. Both the priest and the doctor step back to allow this solemn ceremony to unfold. Once it is over, the priest takes the man’s hand and begins to pray.

The boy whose birth was announced by lightning walks through a dense, lush garden, hand in hand with a kindly priest whose name he does not know. The garden is heavy with dew and smells of the morning. He is anxious, unsure of where he is or where they are going, but the presence of the priest provides at least some consolation. He hears lively birdsong and the rushing sound of a nearby waterfall. Up ahead, a building comes into view between the trees; it is low, curved and made from stone. The building is integrated into the garden so completely that it disappears from view and reappears again as they walk. At the threshold, the priest releases the man’s hand and invites him to step inside. Seeing the uncertainty on his face, she offers some words of encouragement. This is the room where we tell stories about the future.

Jonathan Payne is a British writer based in Washington, DC. His short fiction has been featured at the North London Story Festival and in magazines including Turnpike, Literally Stories, and Down In The Dirt. He holds a master’s degree in novel writing from Middlesex University. Follow him at www.jonpayne.org and on Twitter @jon7payne. 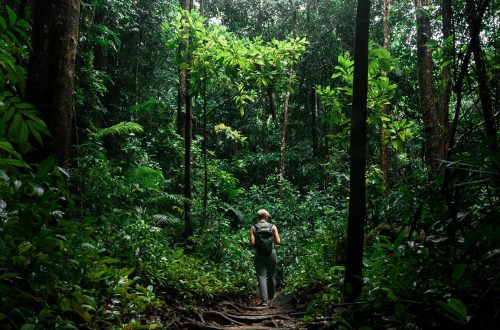