The fence had been there ever since Billy could remember.

Ugly, gnarled brown wood tightly banded together with vicious curls of barb wire like a crown of thorns on top. The fence stood as tall as a full-grown man and ran the length of the boundary between his family’s property and that of their neighbor.

His father said the neighbors had built it when Billy’s grandpa was just a boy and both the fence and the neighbors it shielded had been shrouded in mystery ever since.

Their part of Appalachia was known for its reclusive farm families, but still…there had always been something unusual, unsettling about that fence. About those people.

Those people. Throughout the years, Billy–like his father and grandfather before him–had only caught fleeting glimpses of the hermit farmers who shared their property line.

Who were they? How did they survive in their isolation?

Most of the time Billy’s family and the nearby community’s more neighborly neighbors were far too busy to think such curious questions, much less care enough to seek the answers.

But young Billy’s eyes strayed to the fence often as he played with his golden retriever, Samson, in the yard. Peering into but failing to see beyond the tiny cracks between the fence’s warped slats, he daydreamed about the possibilities–both paradisiac and nightmarish–on the other side.

It was during one such daydream (in which the fence hid a village made entirely of cotton candy like they sold at the county fair) that he first heard the voice.

“I am a poor wayfaring stranger, travelin’ through this world of woe...”

The sweet, angelic soprano’s song drifted over the fence, falling from above to caress his young, welcoming ears.

“Yet there’s no sickness, toil or danger…”

He crept closer to the fence, his eager eye catching a glint of gold between the slats as sunlight made a halo of long, blonde curls and ivory skin.

“In that bright world to which I go,” the last note escaped her frightened lips in a gasp as his fool dog began barking at the fence.

Billy tried in vain to quiet Samson with a whispered “hush!” and a thrown stick, but the dog was as protective as he was playful and continued barking at the mysterious figure beyond the fence.

“Who’s there?” her speaking voice was shaky but just as sweet as her song.

Billy cleared his throat and gave his biggest, friendliest smile, then realized in the awkward silence that followed that his face was as hidden by the fence as hers. He pressed his face against the wood and thought he could see one blue eye looking back but the shadow of her hair obscured the view.

“Oh, um, hi!” he grimaced at the too loud, too high squeak of his nervous voice.

“I mean, hello, Bill,” he overcompensated with a caveman’s grunt and stunted grammar before his natural voice steadied itself, “I mean, I’m Bill….Billy…your neighbor.”

It may’ve been his wishful thinking, but the next interval of silence seemed slightly less awkward. He rattled off a litany of questions about her name, her family and her background, none of which she answered, so he launched into his own life story in hopes of drawing her out. He finally and abruptly shut his mouth when he realized he was rambling.

“Sorry to talk so much,” his laugh was a nervous cough, “I just always wondered who lived on the other side of the fence.”

“Me, too,” her whisper was quick, quiet, as if the words slipped out before she could recapture them, “But I’m not supposed to go close to the fence.”

“What? Why?” He was confused, angry that anyone would try to keep her from going anywhere, from doing absolutely anything she ever wanted.

Her slatted silhouette retracted as she started to walk away.

“No, wait! Please!” his pleading tone was desperate then softened, “At least tell me your name.”

And then she was gone.

Days went by, then weeks, months, it felt like years. Billy practically lived by the fence.

As soon as he got home from school and rushed through his chores, he hopped on his bike and raced to the fence. He spent so much time there, Samson took to waiting there for him every afternoon.

Sometimes she was there, most days she wasn’t. He lived for the days her beautiful voice beckoned him to the fence. Always the same song:

“I am a poor wayfaring stranger...”

But she was no stranger. It took some work to gradually draw her out, but he eventually he got her to open up. He learned that if he could only make her laugh, her resolve to remain reticent broke and the words came tumbling out.

She was a year younger than Billy. She lived alone with her father, whom she refused to talk about. It seemed he was the one who forbade her from going so close to the fence. And she never spoke of her mother, whom Bill assumed was dead.

She wasn’t allowed to go to school or church or even talk to the neighbors. She didn’t know why and seemed distressed when Billy questioned her much about her cloistered life.

In those first few weeks, her fear of breaking her father’s rule cast a dark and heavy shadow over their encounters. She would only give Billy a few minutes of reluctant conversation before rushing off.

But as the calendar pages were torn off with the changing seasons, Savannah seemed to grow more confident and somewhat defiant in her newfound friendship. She still skirted around the subject of her isolation, but she talked freely about everything else.

She began to mimic Bill’s daily schedule, singing by the fence until she heard his steps on the other side, spending hours singing, chatting and laughing with him. They traded stories, funny anecdotes, secrets and dreams they’d never shared with anyone else.

Her father’s insistence on isolation had kept her sheltered from modern technology and pop culture, but it also had kept her untainted by the ugliness of the world. There was an innocence about her–not naiveté, but joy in its purest form. And Billy wasn’t exactly a man of the world anyway, he came from a similarly simple, albeit more social, way of life.

He loved her childlike optimism, her eccentricities and her unwavering faith (in God, in goodness, in him), she loved his bad jokes, his honesty and his fierce integrity.

Eventually they grew to love each other–their mind’s, their hearts, their voices–in a way that most couples who meet face to face never attain after even a lifetime together.

Sometimes they just laid down on each side of the fence in comfortable silence until their breathing patterns fell in such perfect sync that it felt like each other’s lungs were inhaling and exhaling from within their chests.

The fence may have well been a wall, a chasm, an ocean, forever keeping them apart. The closer Billy felt to Savannah emotionally, the more apparent and frustrating the physical barrier became.

He would slip his fingers between the boards to reach her, but the space was too narrow to even hold her hand. The best they could do was brush fingertips.

One day he simply couldn’t take it anymore. He had to see her, hold her, be with her without that stupid fence between them.

At first, she refused to even talk about it. As long as her father didn’t know, she could keep this feeling, this fantasy, and pretend it would never end. Pretend this was a dream, a wonderful dream that she need never wake from.

But Billy needed more. He had tried to climb the fence, but only managed to cut his hands on the barbed wire and suffer a painful fall. He tried digging under the fence, which was great fun for Samson but an ultimately fruitless endeavor.

Finally, since he could not go under or over, he decided to try to go through the fence. He proposed they meet the next day at their usual time, only this time he would bring an arsenal of weapons–a sledgehammer, a drill and a saw–to defeat the evil fence.

Savannah was terrified by all the possible consequences of such a destructive act but too excited at the prospect of finally being in his arms to refuse. She agreed to his plan and they talked giddily till after sunset about how amazing their new life together would be.

The next day, however, Billy was the only one to return.

The silence and stillness that met Billy’s greeting as he approached the fence landed like a punch, a stone, to his gut.

With a growing sense of urgency and desperation, he started sawing and prying at the fence until he made an opening big enough to crawl through.

He cut his forehead on the jagged, splintered mouth of his rough-hewn gate, but ignored the pain and pressed on to the other side.

A large, unkept field awaited him and beyond it lay what looked like a tiny, rundown shack.  He ran toward the dwelling, not caring about the possible confrontation with Savannah’s overbearing father. He just had to get to her, to know, to see she was safe. To see her.

As he neared the dilapidated cabin, he could see it was vacant and had been for some time. Broken windows marred its face like rotted teeth, kudzu and mildew had devoured the pealed paint and warped siding of its crumbling walls, and the front door stood open and crooked on rusted hinges.

Where had she gone? Was she ever really there?

The only response was the solitary sorrow call of a whippoorwill.

Stepping through the open door, broken glass crunching beneath his boots, Bill found the inside of the cabin was as empty and decayed as its sad exterior.   Only one object, a small, dark chest, occupied the ancient, abandoned house. The chest lay gathering dust and cobwebs in the very center of the cabin’s one room.

Billy knelt and wiped some of the grit off the chest’s lid with his shirt, revealing a leather cover with intricate carvings darkened and obscured by the stain of time.  He knocked more dust off and picked up the chest, feeling solid wood beneath its leather cloak.

As he lifted it, he heard something rattle inside and the chest’s brittle, rusted lock fell to the floor. He gently replaced the chest back on the floor and lifted its ornate lid.

Inside was a tiny, perfectly preserved music box made of intricately carved ivory adorned with a gold and dark amber lacquer image of a sparrow. Billy held the delicate treasure in reverent hands, gently opening it to release its lovely, lonesome melody…

“…in that bright world to which I go.”

V.C. McCabe is an Appalachian poet, the author of Give the Bard a Tetanus Shot (Vegetarian Alcoholic Press, 2019), and a Contributing Editor of Barren Magazine. Her work has been nominated for the Pushcart Prize and featured in exhibits and journals worldwide, including Kurt Vonnegut Museum & Library, Poet Lore, Prairie Schooner, The Minnesota Review, Spillway, and Tar River Poetry. Her website is vcmccabe.com & she’s @vcmpoetry on Twitter. 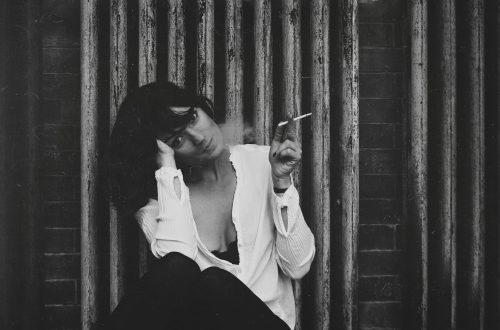 Midnight at the Crossroads Diner by Myna Chang 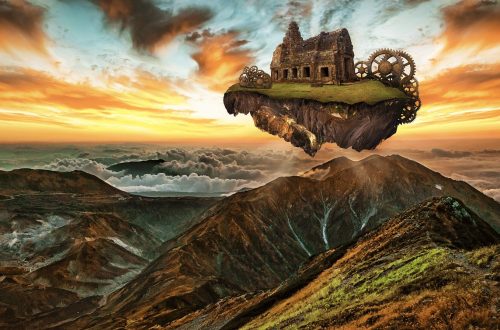 One Hundred Years of Dreaming by Chris Collins 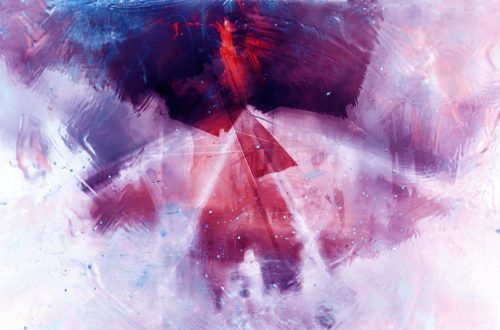