I wait on the cliff edge, a willing sacrifice; a high priestess, pure but not innocent, my conscience shattered in the howling winds. My blood thrums with the roar of the ocean, the future awaits me in a mouthful of blood and I am hungry for the teeth; desperate for the tearing.

The rising storm howls and whips the sea into torrents of foam; the teeth of white horses snap at my hair and wrench my limbs. The wind is a piercing scream of ecstasy against the deep hum of the ocean’s roar. I hold my breath as the waves crash over; they smash me back against the granite, grinding my flesh against the rock as if they might turn me to sand, easing an escape. Though that is not my destiny and bronze cuffs hold me fast, arms stretched high in their sockets. I will not slip, nor creep away.

I think back to the numerous processions, the numerous musicians with drums and tambourines that led me to this place. I remember the pride in my mother’s voice as she boasted of her daughter’s beauty, spoke of my sister’s grace. I recall the cold sputtering of temple lamps in response. So many prayers go unanswered and yet the Gods listen when she least intends it.

The Gods have always listened to me, I am blessed with their favour. I was born during the spring festival and my mother strained while choirs sang and honest citizens poured their libation. Gaia smiled at me, tiny and mewling. She blessed me with strength and wit. “A handsome face.” They said of me, “A powerful gaze in one so young!”

My sister, Andromeda, escaped divine notice. She cowers back from the storm, tended by a legion of servants and hidden in the crook of my father’s arm. She is my mother’s golden girl, her praises sung daily. Her features are delicate and feminine. Her upturned nose inspires odes; her gentle contemplation is a model of virtue. It was easy for me to usurp her honour and take her place upon this ledge. Her face may be fairer than any in history, but the glory of the sacrifice will be wholly mine.

The Monster has been with us for three weeks now. He came first on the day of the new year storm and tore out the hulls of my father’s ships. His anger like lightening, was frightening and sharp. I watched from the temple as he crushed his giant mass through the harbour mouth and fed on sailors young and old, he sucked up their bones and all of their juices. He was a thing of wonder, an awful terror of blood and strength. The debris floated out on departing tides and then surged back on the morning shores.

My father brought offerings to the temple gates. He begged me intercede on the kingdom’s behalf, to ply my Goddess with thanks and honey. He offered her twenty women, sixty cows and a full summer’s harvest. I sung out his prayers and waited in silence. My Mistress sent dreams and insults in omens. She has no interest in cows and wheat, the maidens are hers already by right. What fool is he to think to tempt her? A fortnight’s wishes fell on deaf ears, “She’ll owe you nothing.” I replied.

My mother came next, tearful and begging. She would offer her robes, her music and her players. “Does the Goddess not wish for gaiety and laughter?”

“No, Mother,” I replied, “but perhaps the Monster does?” The players were eaten, much like the sailors. They screamed as he wrenched them limb from gory limb, but their screams lacked harmony. They did not please.

My sister came last, just one week ago. The harbour still blocked and food was now scarce; the fish swallowed up and the people scared. She offered up herself for she owns nothing else. My Mistress thanked her!

My mother wailed and my father wept. The town began its first day of mourning, and my heart was wracked with grief and jealousy. So the beauty of her soul will pacify a Goddess, sate a Monster? In my dreams I have seen the creature crowned. I am his willing slave, his tender servant. He sits high upon my father’s throne, the stone steps slippery with slime and gore. I rub oil upon his writhing limbs while he binds me to him, sweet and tight. My sister is fair, she is not wise. She could not counsel one such as he. She would flinch in the smother of his cruel embrace.

“Fair Sister!” I cried, “Let me take your place.” My Mistress forbade it, I ignored her pleas. My parents looked grateful and though they made protest, they did not stop me.

The Monster comes every evening to this place. He is smooth and slippery,  enormous beyond compare. I am braced for him to rush me, riding the waves, his jaw set with rows of jagged teeth to devour at my flesh in one great gulp of hungry deliverance, but I catch sight of him in glimpses. At first a shadow lingering, an uncertain shape lost in choppy waters. Then a writhing mass, bulging and surging, breaking the waves into unnatural swells. I hold my breath.

The wind drops and for a moment and I see him shift. Then he is gone and my mouth is once again full of wind blown salt. I spit it out and brace myself afresh. There is a hush as the crowd waits. I am poised for glory. My sister weeps.

A tentacle, impossibly close, slithers up the cliff and wraps around my ankle. It’s a rope of expanding and contracting muscle which tickles my calf with a thousand tiny suckers, like a thousand tiny kisses, like a thousand tiny bites! A second feeler uncoils and prods its blunt end into the tender space behind my knee. It nuzzles the crook of my leg like a pet dog seeking comfort, then it pushes further up my thigh and finds its spot. I am held, pinioned. Fixed against the rocks not only by chains, my pride and by my mother’s boast, but by terror and joy, and delicious expectation.

I feel the tentacles flex, crushing and searching, then suddenly in a the Monster is there, looming before me. I can’t see his eyes so I stare down his throat. There are more teeth and tentacles than I can seem to count. I am cold and I had thought my skin numb, but the Monster’s touch burns and I wonder if my skin will scald and blister. My concern is , I can see the teeth coming towards me. They are long and sharp and sink into my breasts like needles. My heart drums louder and a gush of blood decorates my chest. The bronze cuffs break like butter beneath the power of his limbs and the Monster bears me suddenly aloft. He displays me to the crowd, his glorious prize! The pulse at my heaves and pulls. The tentacle swells and I contract, a shuddering a ball of broken flesh. He tears the flesh from my breast and I am gone. I am his, and he swallows me down.

Alicia Fitton is a performance poet based near Manchester, UK. She writes about lust, guilt, lies and justified feminist rage. She would like to add more mice and tentacles. Alicia is a perfectionist who also enjoys dressing up, dancing and playing with swords.  You can read my work at Storm Cloud Kitty or follow me on twitter @aliciamakes 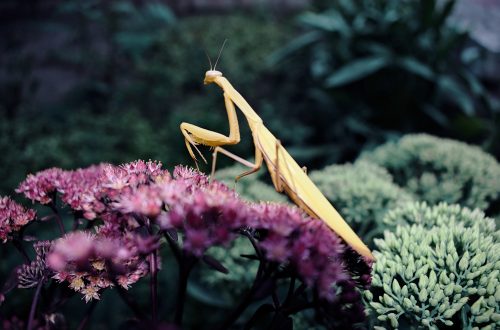 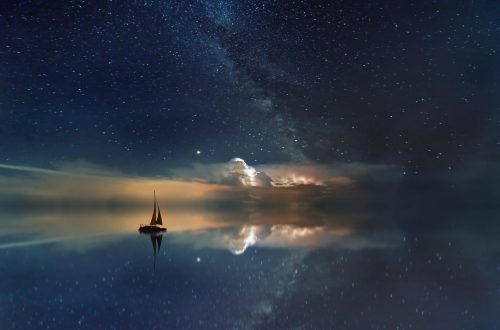 Shapes in the Mist by Merril D. Smith 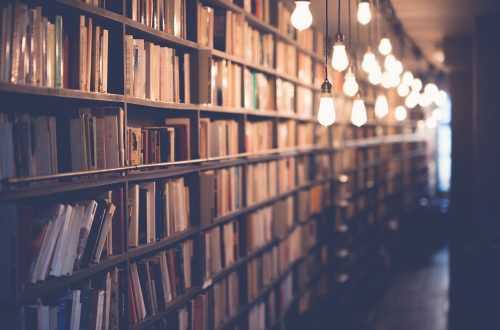