The floors were impossibly white. Whiter than anything Garrett had seen in his lifetime, except maybe the blistering sun on a July afternoon. The overhead lights reflected on the smooth tiles, casting miniature pools of delicate light under his scuffed brown boots. Clouds of dust drifted from his feet with every movement, settling like a dingy fog onto the pristine floor.

He kept his eyes down. A lifetime of scrabbling for survival had taught him his place, which was at the bottom, crushed into the dry hard dirt. This place was too bright, too clean, and far too sophisticated for someone like him. He didn’t deserve to be here. He was supposed to die in a knife fight over water, his thick crimson blood staining the gravel like so many before him.

A pair of dainty white shoes stepped into his line of view. The shoes peeked out under perfectly white slacks, which led up a slender body to a form-fitting and equally impeccable white lab coat. Her face was almost as white as her clothing, the floors, and the walls that surrounded them. Her eyes were a faint periwinkle. Her lips a soft pink. Her silver-blond hair was pulled back into a neat ponytail. She smiled.

“Sorry to keep you waiting, Mr. Hughes. My name is Alice. I’ll be your guide today.”

Garrett forced his dry and cracked lips upward into what he assumed was a smile. He sat up a little straighter and rubbed his hands as if he could scrub off the layer of grime that had become a second skin. With water being so scarce, bathing was a rare occurrence. Yet Alice looked like she enjoyed a daily shower.

Garret stood, shaking loose more dust from his clothing that wafted to the floor. He winced. But Alice only smiled.

She led him through the lobby, past an enormous silver statue of an angel, but not like the serene angels Garrett had seen in churches around the city. This was a naked man, muscles rippling and wings outstretched as he prepared for flight. In his hand he held an upside-down torch, which made little sense to Garrett, and offered even less comfort.

They passed the statue and entered a hallway lined with holographic screens. Each depicted scenes of extraordinary adventure. One man was soaring through the clouds like a bird. A woman slipped through the ocean as lithe as a dolphin, darting in and out of a flourishing coral reef. A pair of lovers strolled along a moonlit beach.

“Are these…” Garrett’s voice came out in a parched croak. “Are these actual… afterlives?”

Alice paused in front of the screens. “Yes. These are just a few examples of what you might experience on the other side. Our computers scan a detailed analysis of your karmic energy, and upload that into the mainframe. Essentially, we’re able to peek in on you to see how you’re fairing in your afterlife.” Her smile never wavered from her lips.

“Huh,” was all Garrett could manage. Selling his soul had seemed like a good idea at the time. An easy and comfortable way to end his miserable existence. But something about the idea of them spying on his afterlife experience sat like a brick in his stomach.

“Now, if you’ll follow me,” she said. She turned and continued down the hall toward a row of shiny steel elevators. Garrett glanced back to the towering glass doors, his last glimpse of the desolate and dying outside world. The lure of swimming in a thriving ocean washed away any second thoughts.

The elevators took them down to subfloor 23. Alice explained that due to the hostile environment, Thanatos Corp had designed their building to withstand any possible climate catastrophes, which meant burrowing down.

She led him down another brightly lit white hallway lined with frosted glass doors. She swiped her ID badge in front of one, and the door slid open to reveal what looked like a comfortable hotel room. At least, what Garrett imagined one would be. There was a bed, a table and chairs, a small dresser, and an attached bathroom.

“Before we proceed, I will give you some time to freshen up,” Alice said. “You’ll find clean clothes in the dresser and toiletries and shaving supplies in the bathroom. Take your time. I’m sure it’s been a while. I’ll be back in an hour and we will begin.” She slipped from the room, and the frosted door slid shut behind her, the little green light turning red. He was locked in.

But he had water. Fresh water. And clean clothes. And a bed. An actual bed.

He lingered in the shower until his fingers wrinkled, the hot water washing away years of filth and humiliation. He shaved off his overgrown beard, startled by the young face staring back at him in the mirror. He found the fresh clothes – a crisp white uniform similar to the one Alice wore. When he was dressed, Alice returned. She carried a tablet and invited Garret to join her at the table.

“There are just a couple of things we need to go over, and I’ll need a few signatures from you,” she said. She laid the tablet on the table and scrolled through as she spoke, checking an occasional box and pausing while Garrett signed with his finger.

“Now, as I’m sure you already know,” Alice said as she swiped, “Thanatos Corporation was created as an elegant solution to the problem of overpopulation and our changing climate. With famine affecting more than two-thirds of the world, we have created innovative new ways to farm. And, of course, having one less mouth to feed does help.” She flashed a charming smile, as if removing a life from the planet was a wonderful thing. In Garrett’s case, it was.

“You can rest assured that we will allow nothing of your person to go to waste. Viable organs will be harvested, and the remains will be turned into fertilizer used in our greenhouses. The gift of your life will give life to hundreds.”

Garrett took a deep breath. He’d heard of the greenhouses and often wondered what grew there. What would a fresh peach taste like? Would he become part of one?

“And last, there is the issue of payment. Is there anyone you wish to bequeath the money to? Or you can donate it to the charity of your choice.”

Garrett already knew his answer. He had no one to give such a generous amount to, and he certainly wasn’t going to let Byron, or his thugs, have it.

“Is St. Katherine’s Orphanage still around?” he asked.

Alice tapped on the tablet. “In Colorado Springs?”

“Yes. It’s still functioning. Would you like to give the payment to them?”

Garrett nodded again and signed his name one last time.

Garrett wiped his hands on his pants, unable to hide the grin that crept across his face. He was moments away from relief. From bliss. Would he see Olivia again?

He lay on the bed that hugged his body like a comforting lover, soft and supple. His head sunk into the downy pillow. Above him a narrow glass screen slid out from the wall and hovered inches above his nose. Alice taped electrodes to his head.

“This will scan you into our system,” she said. “It only takes a moment.”

The glass panel above him blurred into a rainbow of colors, one after the other, filling his eyes with vibrant greens, blues, reds, yellows, and pinks. Colors that had long faded from the outside world. Imaginary colors, he thought.

And then it was over. The glass became translucent again. Garrett sighed, sorry the display had ended. But he would see even more spectacular things on the other side.

Alice filled a small syringe and smiled. “This won’t hurt a bit. God speed, Mr. Hughes. And thank you for your sacrifice.”

She stuck the needle in his arm, and for a moment Garrett’s heart fluttered in panic. Primal defenses kicked in, desperate to keep the heart beating. He gasped as the room around him faded to black.

Then he saw white. Dazzling white light. The light at the end of the tunnel?

His eyes adjusted. He was looking up at the hot July sun. He shielded his eyes.

“I don’t know how you got so many ration tickets, little brother, but you’re a genius. If we sell all this, we’ll be living like kings!”

His heart surged. Olivia. He turned his eyes and found her, walking next to him. She was twelve, just like he remembered her. Dirty hair pulled back in a trucker cap, wearing an oversized torn t-shirt, shorts, and flip flops. She was pulling a large green wagon loaded down with jugs of water. And she was beaming at him. So proud of her little brother. He’d done well. They were going to make it after all.

He was seven years old again. He remembered stealing the water vouchers, but he didn’t tell her. He didn’t want her to get in trouble if he got caught. But the plan had worked, and now they could sell this water around the neighborhood. The excess money would buy them real food for once. The smell of sizzling meat drifted toward them from the food truck parked at the end of the block, and his stomach growled. He didn’t care what kind of meat it was, he was a growing boy and he was starving.

A car pulled up next to them, driving slow, bass music thumping through the subwoofers. A man leaned out of the passenger window and leered at them with a mouth full of metal.

The car stopped, and four big, ugly men got out. They blocked the sidewalk, cutting off any escape.

“I axed you a question, missy,” the man with the metal mouth said. He had a gun in his hand. Garrett glanced around at the others. They were all carrying. His legs felt wobbly.

“We paid for it, fair and square,” Olivia said, trying to hide the tremble in her voice.

“And you was just gonna drink it all yourselves?”

“You know this is Byron’s neighborhood, right?”

“And I know you ain’t stupid enough to be trying to run something up in here, yeah?”

Olivia’s lips quivered. “Of course not.”

The man with the metal mouth smirked. “Yeah. Didn’t think you was. Now just hand over that water, and we’ll be on our way.”

Garrett panicked. After all his work, their dreams were quickly slipping away. “No!”

The man regarded Garrett as if he had just noticed him. Then with a quick flick of his arm, he fired his gun point blank at Olivia’s head. The back of her head exploded out onto the wagon, bright crimson over dusty hunter green.

Two of the thugs grabbed the wagon and hoisted it into the trunk of the car. The man with the metal mouth pointed his gun at Garrett. “You in Byron’s neighborhood. Don’t forget it.”

Hot urine ran down Garrett’s leg. The men got back in the car and drove away. Tears streamed down his dirty cheeks as darkness folded over him.

Then he saw white again. Dazzling white light. He was looking up into the hot July sun.

“I don’t know how you got so many ration tickets, little brother, but you’re a genius…”

Trisha Lea fell in love with writing at eight-years-old and has been honing her craft ever since. She studied theater at the American Musical and Dramatic Academy and has since returned to her first passion. She recently finished her first novel and Tweets daily flash fictions. Her work will be featured in the upcoming December issue of Kyanite Press. She lives in Colorado with her husband, two kids, and two cats.

At the Airport by Catherine Zickgraf 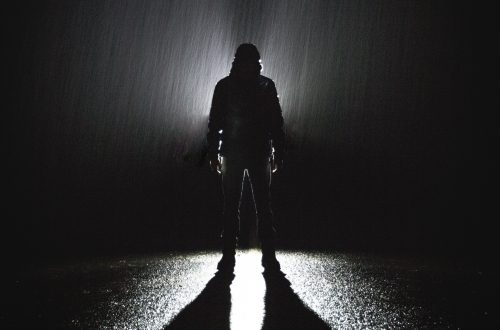