The night I died, the cold permeated everything. The kind of cold that got into your bones.  My fur had thinned so much that I feared hypothermia may kill me, but that wasn’t how my story would end.

It was unusually dark at the edge of the forest. I could barely see in front of me. I felt something catch on my fur and yelped, waiting for the searing pain of the killer fence, but none came. Over the cliffs I could see the yellow haze that usually hung over town was gone, leaving a dark hole below and an inky blue sky punctured by shards of white light above. I sat down to catch my breath. The chill of the damp floor on my stomach reminded me how hungry I was. It had been nearly 6 weeks since I’d eaten.

When the colonists came, they brought giant machines with jagged, tree-eating teeth, flattening our home and building theirs in its place, forcing us to retreat to the high forest. A treacherous journey with young pups and elderly parents. We lost some to the ravines, but most of us made it unscathed. For months they left us alone up there, but before long the food was gone and things got desperate. Those brave enough to risk the journey into town suffered a cruel fate, their pelts ripped from their carcasses and strung up as a warning to the rest of us. Enter at your peril.

It was October when the fence went up. A wire thing, as tall as 2 men, which traced the perimeter of high forest and buzzed like an angry wasp. I could still smell acrid, charred fur whenever I went near it. I felt powerful knowing it had no effect on me that night and climbed through to explore the settlement.

Out of the blackness, I saw a spot of light moving jerkily. The scent of meat hit me like a bullet. My muscles tensed, my fur stood on end. At least my instincts were still strong. It was a girl. Young, maybe 15. When she spotted me, she shone the torchlight into my eyes. She was rooted to the spot, eyes wide, fear palpable. I snarled, baring my teeth. The smell was driving me wild.

“Please, I lost the path, the power’s out and I’m looking for my granny’s cabin. It’s not far from here, she’ll starve to death if I don’t take her food!”

I held her stare. Fearful eyes peered out from under the hood of her thick, red cape. I could have ripped her throat out right there and then, but even in my deranged state, I knew killing a youth would have been wrong. As I contemplated, she ran, disappearing into the darkness. I didn’t chase her though, I knew the isolated cabin, and how to get to it.

The old lady lay in bed while a solitary candle guttered on the nightstand. The girl was right, there was no food. I’d been told human meat was stringy and tasteless, especially the old ones, but hunger had taken over my senses. As I clenched my teeth around her skinny neck, the smell of lavender was so strong it almost choked me, but she didn’t put up a fight and it wasn’t long before I was tearing the skin from her fragile old bones until I was satisfied.

I had expected the panic-stricken girl to return home, but instead she came bustling in the old woman’s back door, ruddy cheeked, regaling granny with her tale of the grisly old wolf. I attempted to conceal my heinous deed by hiding underneath the old woman’s nightdress, but as she approached the bed, she realised the truth and shrieked. I sprang out of the bed and around the girl, straight into the path of a brawny, axe wielding sawmill worker who happened to be passing within earshot. I felt his thick hands around my tail as he yanked me backwards and flung me onto my back. He looked into my eyes as his heavy boot landed in my guts, but looked away as he swung the axe down, hacking my innards in half.

I believed in my dying moments that my thoughts would have turned to my pack. My children. My home.

Instead there was only one thing on my mind. Why hadn’t I just eaten the girl?

Chloe Gorman is a copywriter, poet & aspiring author. Her poetry and fiction leans towards gothic, horror & romance. She has an MA in Professional Writing from Falmouth University for which she received a distinction. She has several poems published, including works in Black Bough Issues 1 & 2, Mookychick, Royal Rose & Three Drops From A Cauldron. 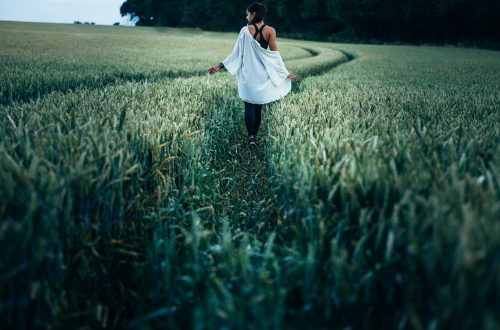 A Nighttime Meditation by Dah 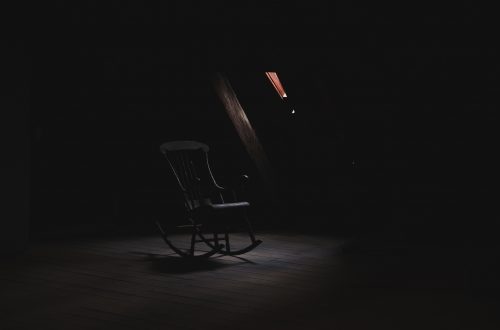