Translated from Portuguese by Toshiya Kamei

The TV is tuned to the Worldwide News Channel.

The reporter says, “The moment the idea of God came across our minds, we thought he was our creator, and a question began to haunt us – ‘How will we react when we meet God?’ Today we will have the answer. Sent by NASA in 2048 on an exploratory mission to the Saturnian moon Titan, South Korean scientist Chin Hae and his American colleague Samuel Johnson found our creator after five years of search. This marks the most important moment in human history. In a few seconds, thanks to the Interplanetary Communication System (ICS) – a network of satellites positioned along the path from Earth to Saturn – we will watch live Samuel reveal us God.”

Twenty seconds tick off. Time expands on the luminous screen. One second later…

The reporter is cut off and the scientist fills the screen.

“I’m thrilled,” he says. “I never imagined I’d find the cause of my existence. For centuries, we have searched for our creator in the stars. We have looked very far away, beyond space and time. But he’s been right here near us all along. Dr. Chin, move the camera closer, please.”

The camera pans up to Samuel’s face, and then moves down. It zooms in on his hand. He’s holding something, but the image is blurry.

“Watch the creator… God is a bacterium. This primitive life form contains a genetic chain similar to ours. Somehow it came to Earth and gave us origin.”

Samuel holds a thin blade in his left hand and the photo of the bacterium in his right.

No one on the other side of the screen believes what they see. No one…

And suddenly, like a lightning bolt that disappears into clouds, the transmission ends.

Toshiya Kamei holds an MFA in Literary Translation from the University of Arkansas. His recent translations have appeared in Clarkesworld, The Magazine of Fantasy & Science Fiction, and World Literature Today. 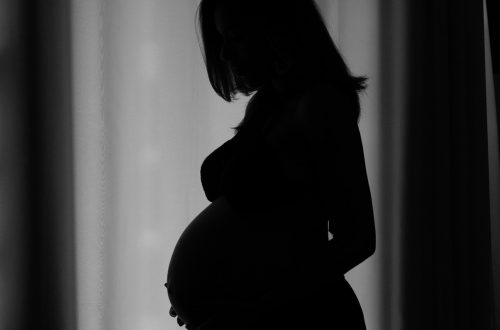 In Bed at Night by Rickey Rivers Jr.