My husband and I were leery of tent camping in an unfamiliar wilderness with potential bear encounters, so we chose to stay in a rustic cabin in the Roosevelt/Tower area of Yellowstone National Park.

“Let’s go on a horseback ride,” suggested my husband, an experienced rider.

“Can’t we just drive around?”  A childhood memory of a horse rearing and throwing me off flashed through my mind. “It would be safer and faster,” I rubbed the back of my neck.

“Hey, relax.  They use on well-established trails,” he patted my shoulder, “you’ll be fine.”

With reservations, I agreed to a two-hour horseback ride with an experienced guide at the Roosevelt Stables.  I needed a boost to mount my chestnut quarter horse, Nutmeg, on this mild July morning. A dozen park visitors accompanied us on our trail ride.  Wonder if anyone else is as nervous as I am.  The horses assumed their positions in line. I was relieved that my husband would be right behind me.  The well-schooled horses swished their tails to keep off flies and plodded along in single file along a well traversed, zig-zagging trail over uneven terrain.  My horse stumbled over a tree root.  I lurched forward, clutched the saddle horn, and gasped.

“Hold on,” directed my husband.

I slid back in the western saddle as my horse climbed the hillside covered with Juniper, white spruce, and Douglas fir. The air smelled of pine, leather, and salt.  The trees were widely spaced, so I didn’t have to duck branches.  I could see beyond the horse’s rump in front of me. I held the reins, grabbed the saddle horn, and scooted forward, but I slid back again despite my effort to press my thighs firmly into my horse’s flanks.

Once we reached the crest of the hill, our horses fanned out along the ridgeline as if they had rehearsed for Chorus Line. The line-up provided all the riders with a panoramic view of Pleasant Valley.  Bands of color formed waves like sports fans in a stadium.  The flaming red and yellow Indian paintbrush and blue-violet Camas and Lupine struck me as more radiant than a Van Gogh painting.  The spicy, bitter aroma of the silver, white, and black sage was overpowering at first. We saw hundreds of bison grazing on grasses and sedges in the meadows and sagebrush flats below.  We listened to the bison grunts, snorts, and bellows carried on the wind.  Their massive size and sheer numbers captivated me and carried me back in time.

I imagined a long ago scene when millions of bison roamed the western prairies. I felt the ground tremble with their pounding hoofs as dust clouds rose.  I smelled their musk.  I heard the Arapaho songs and chants of their Sun Dance and summer solstice festival. I saw Arapaho warriors draped in bison hides armed with spears and bows and arrows readied for their seasonal hunt for these enormous beasts.  I felt an adrenalin rush and beads of sweat formed on my forehead as I rode alongside these skilled, courageous hunters.  I sensed the importance of the hunt to sustain the tribe over the harsh winter months.  Then the high-pitched squeal of a bald-headed eagle soaring overhead brought me back to the present.

Leaving the open plateau, we re-entered woods along Lost Canyon and Lost Creek.  I could understand how someone could get disoriented among the trees and uniform colored rocks.  Wonder who named the canyon and creek “lost.”  My stomach became queasy.  I felt like the tree branches and canyon walls were closing in on me.  I redirected my attention to the canyon walls. I scoured the rhyolite rock hoping to see agile, big horn sheep navigate the narrow cliffs.  I squinted, regretting that I had forgotten binoculars, to see moving grayish-brown specks on the steep canyon walls.  In the distance, I heard the high shrill of bugling elk.  The piercing sound, like finger nails scraping on a chalkboard, caused my arm hair to stand.  The trail continued to ascend over rocky, rolling terrain near Lost Creek Falls.  I strained to hear rushing water.

“Aren’t we going to stop and see the waterfalls?”  I hoped we would take a break and walk to the falls.

“No. The falls are impressive in the spring when the mountain snows have melted, and the water volume is high.  Now, very little water flows over the rocks.  We’re going on down to Lost Lake,” stated our guide.

As we neared Lost Lake, the ground became marshy.  I worried that Nutmeg’s hooves would get stuck in the mud.  I hoped my horse would not sense my uneasiness.  Convincing myself to rely on my horse’s sure-footedness, Nutmeg maneuvered across a wooden plank walkway.  Clickety-clack.  Once across, I sighed and patted my horse’s neck, “Good boy.” The lake looked more like a large, pond.  Water lilies floated in the shallows and white phlox, mauve prairie smoke, and silvery-purple sugar bowl clematis blooms created a floral mosaic along the shoreline. A small duck resembling the coloration of a Canada goose glided across the lake.  Our guide informed us it was a male Barrow’s Goldeneye.  Then I saw a white flash as a dark-eyed junco flew to a nearby juniper.

“Stay alert.  We may see moose or black bear down by the lake,” directed our guide.

I had never seen a moose or black bear in the wild.  My muscles tensed.  I was both excited and afraid of the possibility. Would my horse bolt?  Stay calm.

“Don’t worry.  They’ll hear us coming.  They’ll avoid us as long as we don’t appear as a threat, especially to a mother and her young,” assured our trail guide.

My heart was racing, and my palms were sweating.  I was ready to move on.  The path came out by what appeared to be a small cemetery, but what I thought were headstones were fossilized tree stumps.

“That’s all that’s left after people vandalized and took samples,” explained our guide.

I shook my head. “It’s a shame when people destroy public property.”

“The park service placed a wrought-iron fence around the remaining, petrified, redwood tree to protect it.”

Wonder how long it will remain intact.  From there, our horseback ride wound through Pleasant Valley.  The fragrance of the Alpine meadow was intoxicating.  I began humming, “The hills are alive, With the sound of music, With songs they have sung, For a thousand years.”  I smelled a blend of vanilla, mint, lemon, and sweet corn.  My mouth watered, and I longed for an ice cold, tart lemonade.  To the south, I saw the barren, granite peak of Mount Washburn, towering over 10,000 feet. A fire tower sat atop the mountain like a candle on a cupcake.

“The views must be magnificent.  How far can one see from the peak?” asked my husband.

“Depending on the weather and cloud cover, you can see as far as fifty miles.  It’s not unusual to see the snow-capped Teton Range,” our guide pointed southeast.  “Hiking Mount Washburn is beautiful this time of year with all the wildflowers in bloom,” he smiled, “however, it is strenuous as you gain elevation.”

“How far is the hike?” my husband inquired.

“It’s a round trip but to take at least half a day.  A visitors’ center and observation deck are on the lower levels of the fire tower.  The views are incredible.  If you have time, I highly recommend it.” 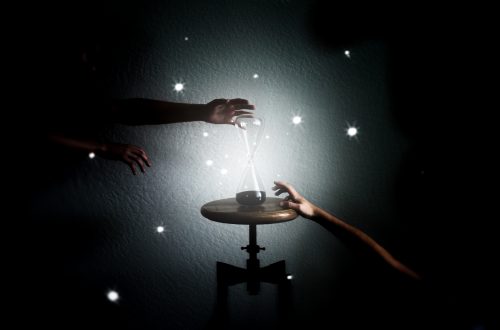 Reading in the Twenty-Second Century by Keith Mark Gaboury