Once upon a time there were three pigs.
One became choice bacon,
the other choice ham,
while the third went on a killing spree
of butchers throughout the land.
By the time they caught him
he was the most prolific serial killer in history.
His fame rivaled Hansel, Aladdin, and even Little Red.
He was the swine of swine, who to his dying day
never expressed a single word of remorse.

Jeffrey Zable is a teacher and conga drummer who plays Afro-Cuban and Afro-Haitianfolkloric music for dance classes around the San Francisco Bay Area. His poetry, fiction, and non-fiction have appeared in hundreds of literary magazines and anthologies.    Recent writing in The Mark, Awkward Mermaid, Ink In Thirds, Defuncted, Fewer Than 500,Tower Journal, Uppagus, After the Pause, Spelk, Chrome Baby, Former Cactus and many others.In 2017 he was nominated for both The Best of the Net and the Pushcart Prize. 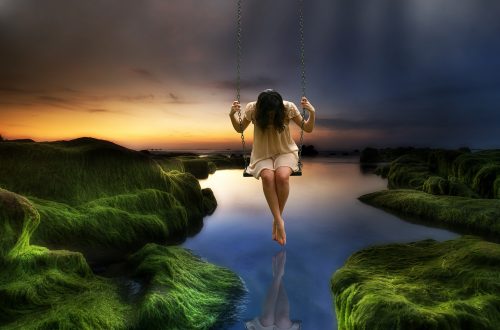 Erin Kowalski and the Nexus of Time by Brandon Chinn

Into Dust by Craig Rodgers