Tammy lingered over a cigarette rimmed red with someone else’s lipstick. She exhaled, the wisp of stolen smoke rising to join the music that seeped from the diner’s radio. She stubbed out the burning ember, and as the last spark spiraled heavenward, she closed her eyes and made a wish.

Expectation danced up her spine, a frisson, tingling, sharp. In that brief heartbeat of time, impossible dreams shimmered at the edge of her grasp. Dizzy, she opened her eyes to find a stranger standing close, hot breath brushing her cheek. She jerked away, flustered.

“Happy birthday, Tammy.” He smiled, white teeth gleaming amid dark stubble as he slid into the red-vinyl booth. She frowned, certain the diner had been empty.

Jim Morrison’s mournful voice floated back to her; she hadn’t realized the music had faded until it reappeared. Shaking away her unease, she swept the previous customer’s crumbs off the table and asked the stranger if he wanted a menu.

She scribbled the order on her ticket pad. “How did you know it’s my birthday?”

She nodded, but didn’t turn away. His dark eyes held hers, and her face warmed with the impression he had seen more of her than she would like. Still, she was curious. “And my name?”

He smiled and pointed to the nametag pinned to her waitress uniform.

“Oh.” She snorted a laugh and snatched the dirty ashtray, scurrying past the soda counter to escape into the kitchen. The heavy door swung shut, blocking the unexpected customer from sight.

Her father was there, washing the last of the evening dishes. She started a fresh pot of coffee. His little portable television droned on about the war in Vietnam.

Tammy scowled and twisted the channel knob. An American Bandstand rerun flickered, fuzzy with static. She adjusted the television’s spindly antenna, and the sound solidified. “Next up is Jimi Hendrix, with a song that reached number twenty on the charts two years ago.”

Tammy thumped her hip against the counter in time with the raw rhythm of Jimi’s guitar. Most of his songs were etched into her memory; they’d been unavoidable lately. She frowned, unsettled anew at the thought of anyone dying so young. He’d only been twenty-seven. But, she had to admit, his fame had skyrocketed in the weeks since his death. The radio announcers talked about him non-stop, and his face peered from the covers of all the music magazines. Tammy shook her head—it was too bad he wasn’t around to enjoy it.

“I don’t know how you can listen to that noise,” her father groused. He wrenched the knob back to the news station. Politicians bellowed and shook their fists.

Tammy sagged. As soon as enough coffee dribbled into the pot, she filled a chipped porcelain mug and shouldered her way through the swinging door. Hinges creaked, and the sweep of the door hid the red faces of her father and President Nixon.

The stranger still sat alone in the dining room, his arm resting on the back of the booth. Tammy set the coffee in front of him. “Will there be anything else?”

He eyed her, then surveyed the deserted diner. “I’ll let you know.”

Tammy forced a smile and retreated behind the counter to finish the closing chores. The stranger watched her, his scrutiny the grit of sandpaper. She shifted position to avoid looking at him while she sorted the clean silverware. Forks and spoons jangled into their separate baskets, matching the tone of the Billboard Hot 100 singles playing on the big countertop radio set. She inched the volume up, then refilled the ketchup bottles.

After a few moments, she turned to see if the stranger wanted more coffee. The booth was empty. Tammy wondered how she’d missed seeing him leave the little diner; he’d gone as quietly as he’d appeared. No money graced the table, and she sighed. Her father would scold her for daydreaming while a drifter stiffed his tab.

Her annoyance dissipated when the Rolling Stones poured from the speakers. She turned the volume up loud, grabbed a ketchup bottle-microphone, and unleashed her voice, joining Mick in his hymn to wealth and taste. She soared with the high notes and crooned counterpoint on the lows. Her voice lit the drab restaurant, a stream of radiance, proclaiming ambition and sympathy as she paraded around the soda machine.

“You sing the song of a saint.” The stranger’s words cut through the music.

Tammy froze mid-sashay. Where had he come from? The parking lot?

“I like the Stones, too.” He smiled and sat on a stool. “You should be in LA, making records, not stuck in this dank little town.”

Avoiding his gaze, Tammy set the ketchup back on the counter. The scuffed chrome finish came into sharp focus, and she noticed the yellowed stuffing poking through the cracks in the vinyl stool tops.

“You can do better than this, Tammy.”

“Oh, I don’t know,” she stammered, glancing at the kitchen door that separated her from her father. “How could I leave?”

Her pulse surged, and she studied his face. “Are you a… a talent scout?”

“Yeah?” She leaned forward, weight on the balls of her feet. “Have you worked with anyone I’ve heard of?”

He paused, turning to the radio. It was silent. Tammy’s forehead wrinkled. She could swear it’d been playing.

He touched a fingertip to the edge of the radio and it flared back to life: “Here’s another Hot 100 star, Janis Joplin.”

Tammy stared, hugging her arms around herself. “You helped her?”

She shifted her weight. “How?”

“A record deal. A concert tour.” His voice deepened. “I can grant that wish.”

Tammy hesitated. Janis wailed about the pieces of her heart. “Why me?”

“You’re talented. Desperate to escape this place. And,” the stranger grinned, pearl teeth glinting, “we have an opening.”

He rubbed a hand over his jaw. “We want a new singer. Standard ten year contract. But the offer’s only good until midnight.”

Tammy’s eyes darted to the clock on the wall. It was late. “I don’t understand how you can do all that.”

The last wisps of Janis’s voice floated through the room as Tammy reached for his hand. A spark of static electricity crackled and the DJ’s voice pushed to the forefront of her awareness.

“This just in: Janis Joplin was found dead today in her California home. She was only twenty-seven. We’ll have more …”

The stranger shrugged. “She’ll be even more famous, now.”

Myna Chang writes flash and short stories in a variety of genres. Her work has been featured in Daily Science Fiction, The Copperfield Review, and Dead Housekeeping, among others. Find her on Twitter @MynaChang or read more at mynachang.com. 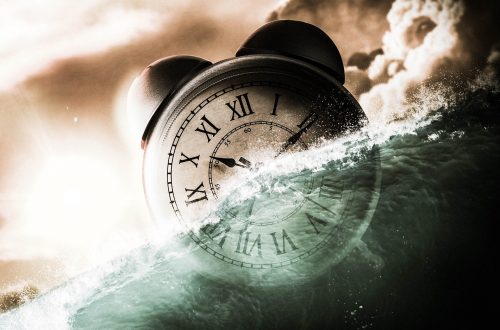 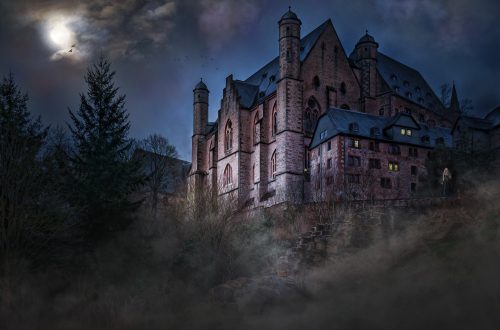 Army of Silhouettes by Foy Timms Tea and the Weight of Spirits by Janna Miller